At the end of May 2014 we conducted a survey of the coastal swamps of Yuraygir National Park (North of Coffs Harbour). This was part of an ongoing 5 year project on an undescribed species of Tenuibranchiurus crayfish that occurs in coastal swamps of northern NSW. This latest survey was a subset and part of an Aquatic Biodiversity Study for Coffs Harbour City Council that has been ongoing for the last 2 years. The project is finally completed and this last survey was the final in the series. We are currently in analysis and write-up with the first draft due for issue to Council in the next week or so. 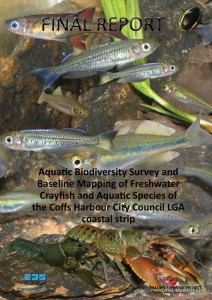 As part of the Australian Crayfish Project people tag along to volunteer to help with surveys. On this occasion Craig Burnes tagged along to help out and enjoy a bit of fishing, crayfishing, camping and four wheel driving with me. It was just a tag along where Craig is fully self-sufficient and we met on the Friday at the designated camping site, (Station Creek Campground, Yuraygir National Park).

Craig left Sydney Friday morning and I left Port Stephens early Friday in pouring rain but by the time I reached Port Macquarie it was behind me and for the rest of the day we were in bright sunny weather. I made it to the campsite first and started setting up camp and Craig arrived shortly after. After a few quick introductions and Craig setting up his tent we headed off into Yuraygir National Park to set a load of box traps in the creeks, swamps and lakes of this pristine coastal area.

We managed to do a bit of fishing in between surveying. On the first day during howling winds and pouring rain we went down the beach for a fish and I managed to catch a flathead for lunch, the next day in perfectly sunny weather Craig managed a nice bream.

Both Crimson Spotted Rainbowfish Melanotaenia duboulayi and Ornate Rainbowfish Rhadinocentrus ornatus were recorded. They were abundant and easily seen in large schools at several sites. Photos of the Coffs Harbour Rainbow fish have been sent to the Australian Museum for display on their website. http://australianmuseum.net.au/image/Ornate-Rainbowfish-in-an-aquarium

Crustaceans were the main target of the surveys and we generated a surprising amount of information on the crustacean species in the area.

The presence of large numbers of freshwater shrimp was a very good sign and an indication of the pristine nature of the survey area. Shrimp are a major food source for native fish, eels, platypus, reptiles and birds so very important for a healthy ecosystem. Freshwater shrimp were recorded at numerous sites with both Paratya australiensis) and Caridina indistincta present in abundance. Caridina nilotica shrimp were also recorded at one site and the Riffle Shrimp Australatya striolata was recorded from numerous sites in flowing coastal streams as well as the East Australian river prawn Macrobrachium tolmerum.

Both adult Tenuibranchiurus and juvenile C. cuspidatus look very much alike so they all need to be examined carefully to identify the species.

I was lucky to have Craig with me as we were catching large numbers of Cherax cuspidatus. I was scooping them out of swamps and creeks and dumping them on the bank. I just took a quick look at them to check they were C. cuspidatus as I was more focused on finding other species. Craig on the other hand was checking the C. cuspidatus that landed at his feet. He found a female C. cuspidatus with juveniles attached, which was a great find and something I would have missed. A female carrying juveniles in winter is valuable information on the species and the information gathered will be included in a species redescription currently in preparation.

Exceptionally good news was that the invasive freshwater crayfish Cherax destructor was not documented within the survey area. The common blue claw yabby Cherax destructor has been widely translocated into eastern drainages of NSW (Coughran et al 2009, McCormack 2014 in press), creating ecological concerns for native aquatic fauna. Wherever outbreaks of C. destructor occur in eastern drainages the endemic crayfish’s future in that area are seriously threatened. Cherax destructor is a robust invasive species, which has the ability to produce two generations per year with high fecundity, ensuring that once translocated, the species may become established within the first 12-24 months. Small translocations of several specimens can rapidly escalate into enormous populations with the potential to outcompete less competitive endemic freshwater crayfish species and adversely affect the eastern coastal aquatic ecosystems.

The Small Spiny Crayfish Euastacus dangadi was recorded from clear flowing streams with dense overhanging terrestrial vegetation. The greatest populations are in forest streams where it prefers the shallower pools and riffles.

Of significance was the discovery of the River Swimming Crab Varuna litterata. Craig and I had set a number of traps and as you do, I sent him off downstream to check his traps whilst I went upstream to checked mine. Well surprise surprise I captured a couple of freshwater crabs in my traps and Craig shouted out that he also have bagged a couple of these spectacular crabs.

They are a marine crab known to occur in freshwater, being excellent swimmers and able to move with the currents along the coast. In Australia they have only been recorded from south east Queensland and north into Northern Australia (Qld Museum). They are also known to occur in India, East Africa and Japan. The discovery of this species this far south greatly increases the known distribution of the species (P. Davie. pers. comm. 2014, QM) and an important range extension (S. Ahyong. Pers. comm. 2014, AM). Craig and I will do another survey next month to gather a bit more information on the crabs. We are actually heading to Queensland to research E. binzayedi with another tag along volunteer from Queensland and will spend the night on the side of the creek where the crabs were found and see if we can gather some more information for the night on the way up. It’s just a quick stop over, Craig is leaving from Sydney and I’m leaving from Port Stephens. We will meet onsite at Yuraygir National Park and fish for freshwater crabs overnight. We should both get there early afternoon and have a chance to beach fish, hopefully we will catch a feed of fish to cook up on the barby that night, then head to Queensland the following day.

We are interested to gather more information on the crabs in the area and we will publish our results in a scientific journal to increase the knowledge base on this crab species.

If you have a passion for freshwater crayfish, love fishing and camping then think about joining us as a volunteer and tag along on our next adventure.

McCormack, R.B. New records and review of the translocation of the yabby Cherax destructor into eastern drainages of New South Wales, Australia. Australian Zoologist. in press.