The Mt Elliot Crayfish Euastacus bindal is a small dwarf group crayfish only known to occur within the Mt Elliot mountain group near Townsville, Queensland. 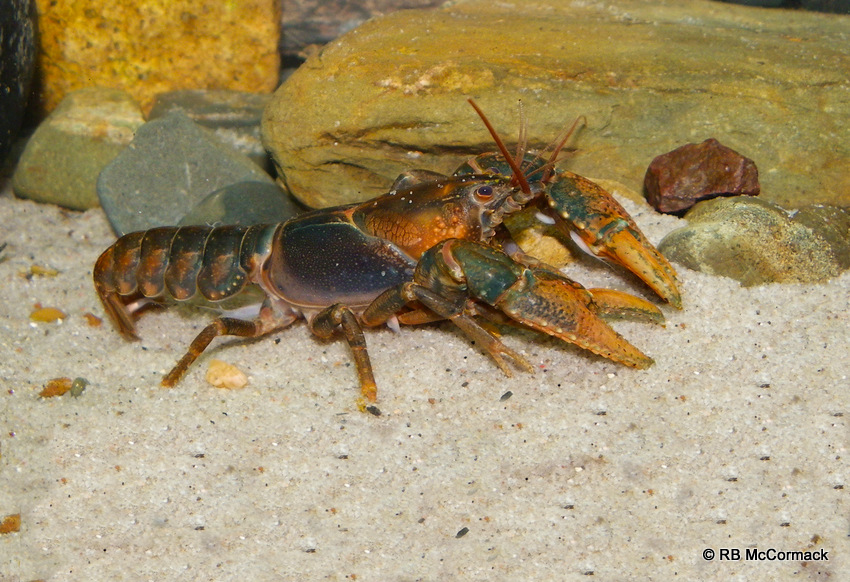 History: Euastacus bindal was described by Garry Morgan in 1989 from just two immature specimens collected by Monteith, Thompson and Hamlet in 1986. An initial survey by Morgan in 1981 identified the area towards the top of Mt Elliot as suitable for Euastacus crayfish but despite his best efforts no further specimens were collected. A follow up survey by Monteith, Thompson and Hamlet in 1986 managed to collect two specimens. Morgan described these two specimens but recorded no information on the species colour or habitat, etc. 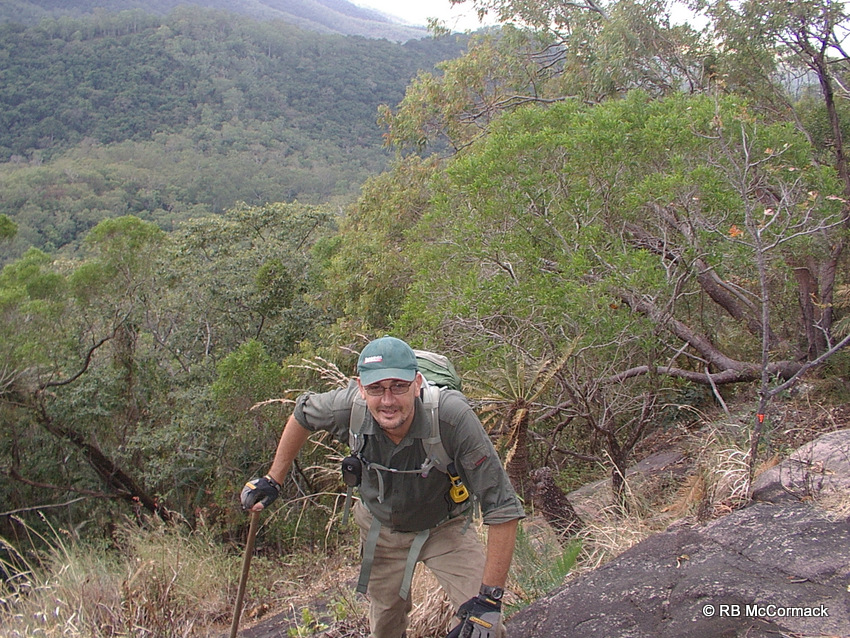 Getting there is not easy; Paul Van der Werf heading up Mount Elliott

As part of the ACP, research on Euastacus bindal commenced September 2008 with surveying of the lower sections of the streams of Mt Elliot below 100 m a.s.l. The next survey was in August 2010 where the Mountain was surveyed up to 350 m. The next survey was by RB McCormack, P Van der Werf & D Jerry in May 2011 and the Mountain was surveyed up to 850 mtrs. Another survey planned for mid July 2011 was cancelled when we travelled 2000 km to survey the mountain and when we got there were advised the park was closed and all permits revoked whilst they burnt off for 3 days. The next survey was conducted by RB McCormack and P Van der Werf later in July 2011. Another expedition was conducted by Rob McCormack and Karl Moy in early September 2015.

Hammock camping in the forest

This is a remote difficult area to survey, requiring careful planning with a long hike in to the base of the mountain then a difficult hike up the mountains. You need to be fit, carry all your equipment and supplies and be prepared to camp on the mountains. We alway use hammocks when we hike as they are waterproof, insect proof, up off the stinging ant, spider, centipede and scorpion infested forest floor and only weigh 1.5 kgs. Queensland tropical rainforests are nasty full of stinging and biting plants, animals and insects. 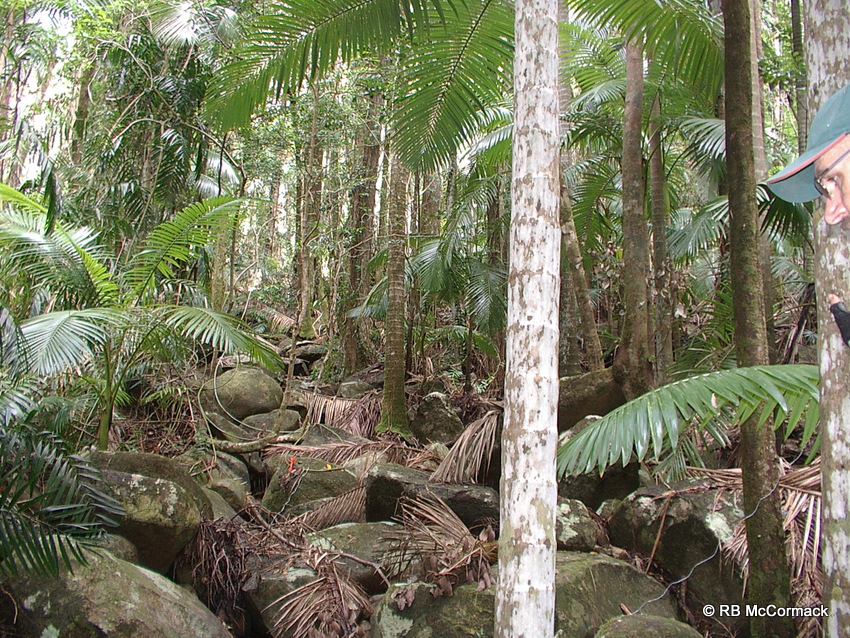 The crayfish Cherax cairnsensis occurs in the Mt Elliott area, but is not sympatric with E. bindal. Although there are numerous fish species at lower altitudes and that includes above the Alligator Falls, none were found with E. bindal. Macroinvertebrates were present in the pools and even under the same rocks as the spiny crayfish. Two species of diving beetles, both family Dystiscidae were present in good numbers with E. bindal. Also Aeshnid dragonfly larvae family Aeshnidae were also present in scattered numbers. The only other species in the region were Riffle Shrimp Australatya striolata that tended to be restricted to the faster flowing riffle sections of stream. 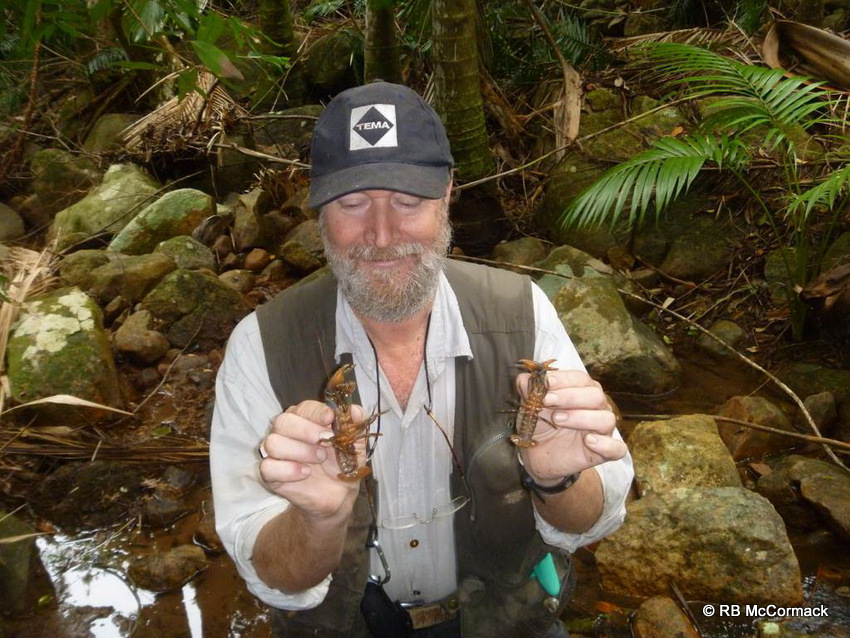 Rob McCormack with a couple of Euastacus bindal

Size: Euastacus bindal is a freshwater crayfish with a maximum-recorded occipital carapace length (OCL) of 36.8 mm and a weight of about 34 g.

Breeding: Sexual maturity starts at approximately 27 mm OCL but little else is known. The largest female (36.83 mm OCL) was not berried in July which is significant. This may indicate that they have an unusual breeding season or that not all females breed each year. Their growth rates are unknown but small juveniles from 0.5 g, 10 mm OCL were common in the creek in July and we estimate that these are 6-12 months old. 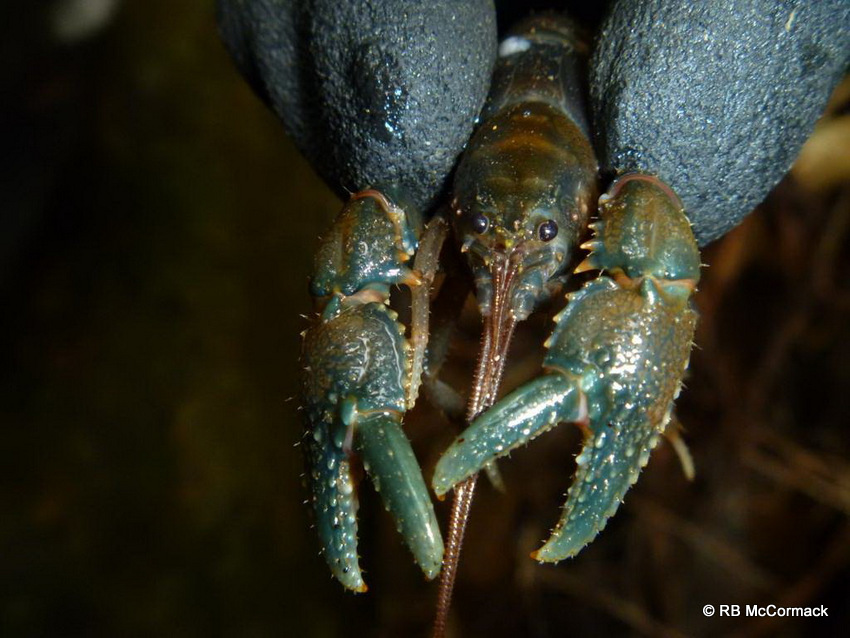 Distribution: Mount Elliot is an isolated mountainous area located within Bowling Green Bay National Park 30 km south west of Townsville, Queensland. It is a relatively small area with approximately 250 square kilometres of mountains comprising a dozen peaks with the tallest Mt Elliot reaching 1220 metres. At this time the species is only known from the upper reaches of three stream systems on Mt Elliot in Bowling Green Bay National Park. We expect that further research will expand this area as there are seemingly suitable high elevation stream systems where it could occur to the south of its current known distribution. Eventually, someone with the energy and enthusiasm will make the effort and survey these streams. 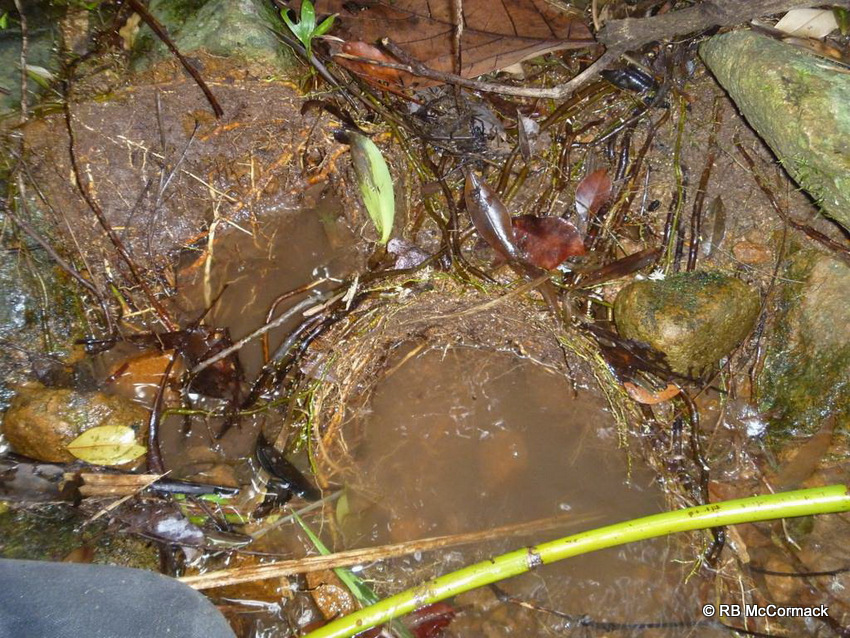 Conservation status: This is one of Australia’s most Critically Endangered species. This species could easily go extinct within a few years. Climate change, drought and bushfire could easily wipe this species out, only time will tell. This species seems to be directly linked to the palms along the creek, anything that impacts the palms will impact the endangered crayfish below. 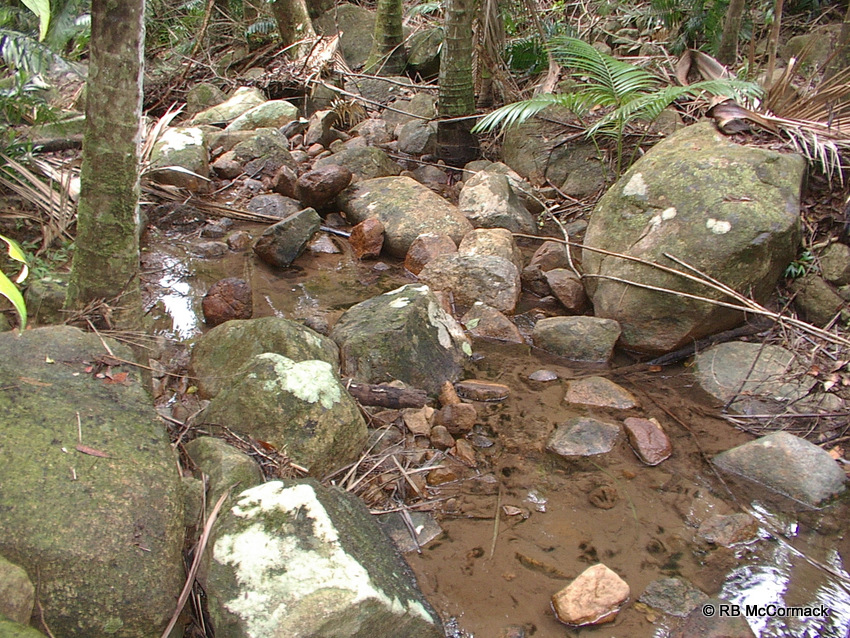 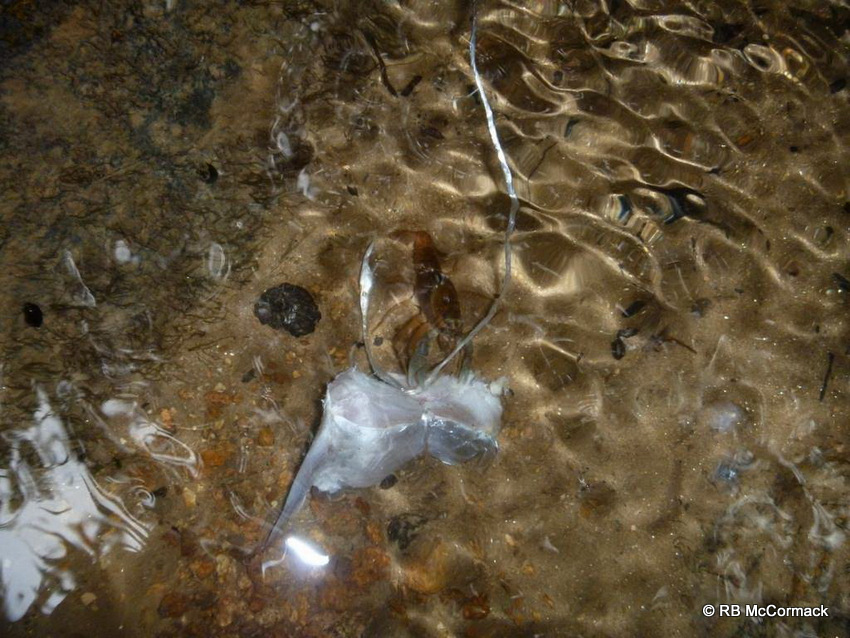 Euastacus bindal attracted to fish bait in middle of the day

Euastacus bindal out and about in middle of the day

If want to help with the conservation of crayfish or you like this post and would like to see more then help us out and DONATE a few dollars towards the cost of research which is all voluntarily conducted at great personal costs.