The ACP has a number of projects going in this freshwater crayfish hotspot and in August 2016 a team got together to further investigate.

This project is nearing completion with final surveying being conducted this trip to help define the species distribution in NSW and Qld. 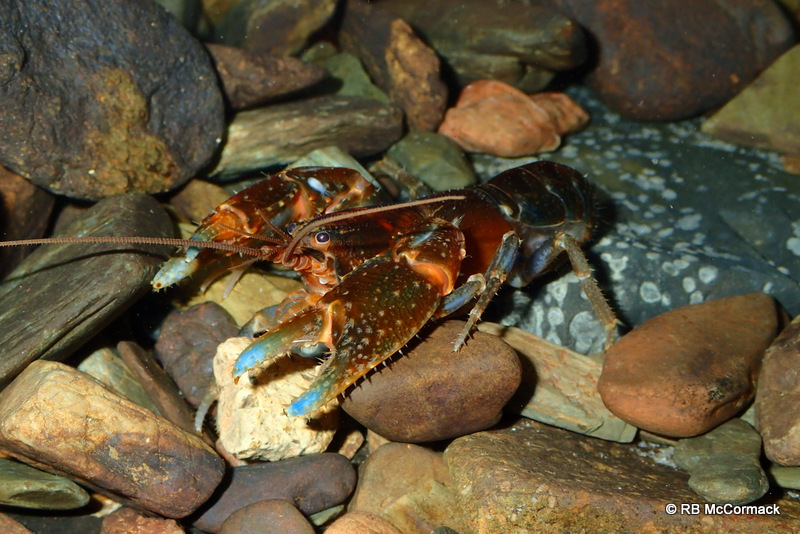 This project has been ongoing for quite a while and this trip was just further defining the distribution and fecundity of the species.

The Strong Crayfish Euastacus valentulus from the upper Tweed River

This project has been nearly completed for some time. We know the species occurs south of the Tweed River and another species occurs from Currumbin creek north, it’s the Tweed and associated creeks that we needed to find out whats in them. Interestingly this trip we didn’t find any Cherax in the main Tweed River but heaps in the tributaries of Terranora Creek. 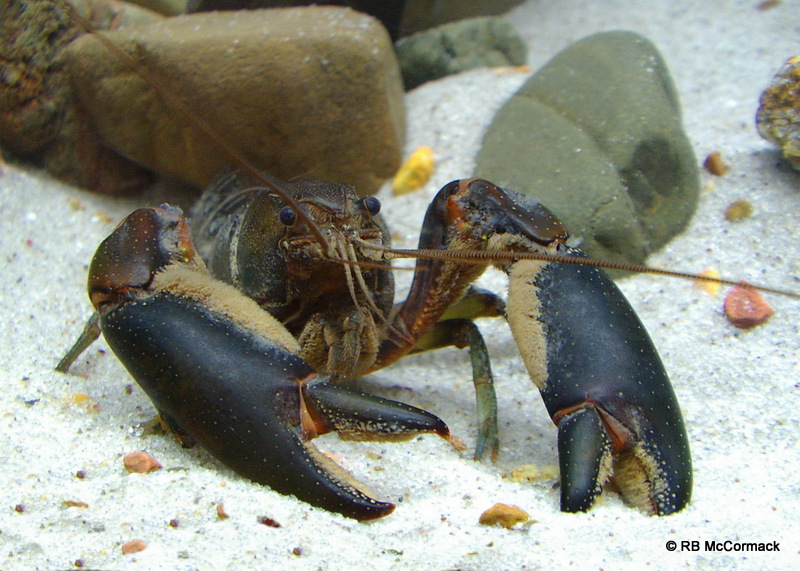 This project is completed and just awaiting the completion of the E. maidae paper as both will be published together. 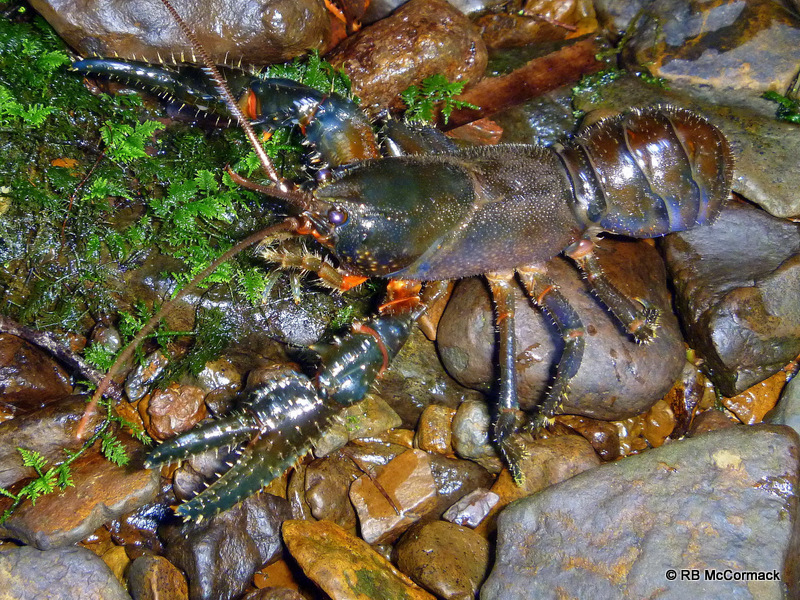 Base camp for this expedition was Kira Beach Caravan Park at Coolangatta. We had a couple of cabins and these were base camp for our daily expeditions.

Paul fishing from the veranda

Paul managed to catch a bream off the cabins veranda.

Paul with the catch of the day

Day one started in the upper Bilambil and Duroby Creek area of northern NSW. This is a very interesting area, mostly an undescribed species of Cherax crayfish and Euastacus valentulus. There are another 2 species of Euastacus crayfish in the area and these were the main target of our research. 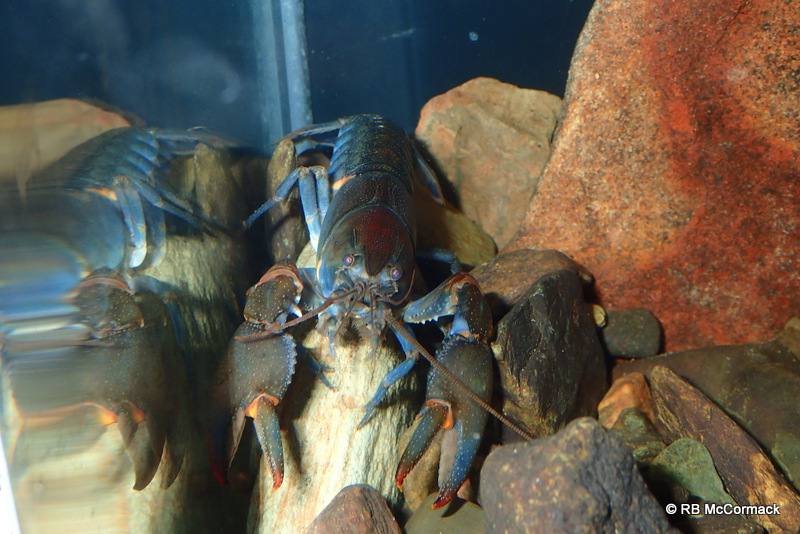 Day 2 saw us in the National Parks of NSW, Wollumbin, Mebbin, Limpinwood and Numinbah, etc. All basically the upper Tweed River drainage. Our thanks to Lance Tarvey of NSW National Parks for all his help and assistance with guidance and access to the management trails. Paul, Nathan and I caught so many Euastacus valentulus it was ridiculous.

The survey team in the upper Mudgeeraba Creek area

Day 3 back into Queensland and the upper Mudgeeraba Creek. Paul Donatiu the Coastal Catchments Southern Area Manager was our guide for the day. Our thanks to Paul for taking the time to show us this amazing area and arrange access to the numerous private properties we surveyed. We built up quite a team for this expedition with Isaac, Kirby and Dave joining both Pauls and myself to trudge the creeks seeking critters. The upper Mudgeeraba Creek was an amazing area with abundant crayfish everywhere. We found Cherax sp., Euastacus sulcatus, Euastacus maidae and Euastacus valentulus throughout the area. 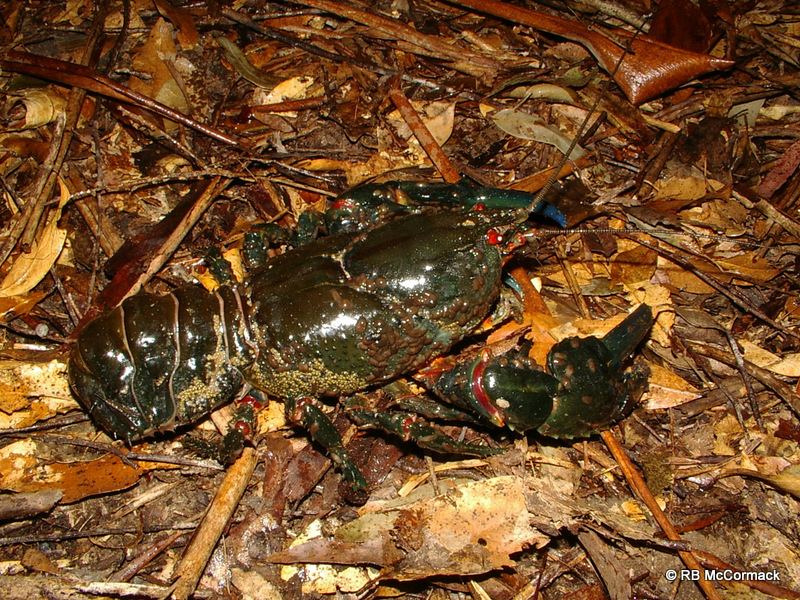 Day 4 in Queensland the Natural Bridge area to start with and then back through NSW doing upper Crystal, Numinbah and Couchy Creeks. Met a real wackjob when were in the upper Crystal Creek area, we were parked on a public road, in the public creek beside the road when we were accosted by this obnoxious local. Seems he thinks that the whole area is his and no one else is allowed in the area. He has no idea what species occur in his creek, he doesn’t care whats in his creek, how dare anyone even look in his creek, just get the F#*@ out of the area. A real charmer with a real bad attitude. Luckily, we are not the types to take offense when we meet the local weirdo, however, others may not be as forgiving, let hope a bunch of recreational fishers legally having a fish in the creek don’t encounter him.

Day 5 saw us packing up and heading home. It was a great expedition with a wealth of information gathered. My thanks to all those that helped in the gathering of all that information.