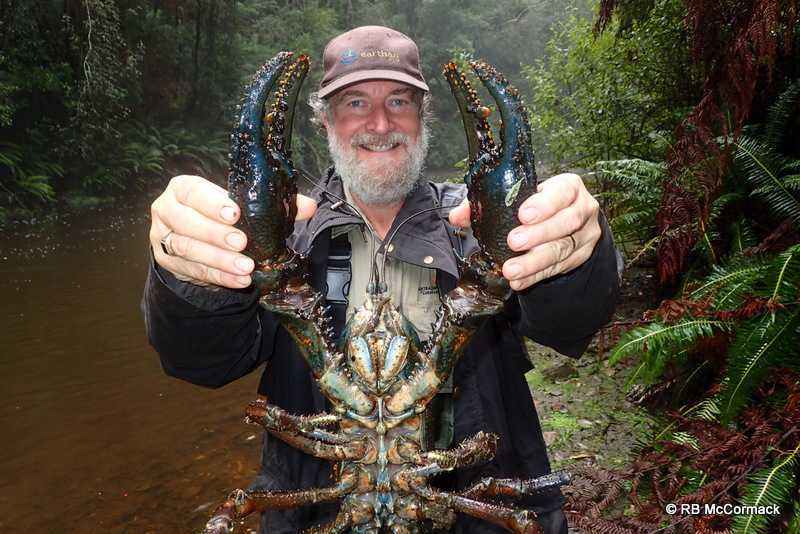 The Tasmanian Giant Freshwater Lobster Astacopsis gouldi is the planets largest freshwater invertebrate. It’s been known to grow up to 6 kg, theses days however, animals weighing 2–3 kg are considered large and anything over 4 kg as gigantic. 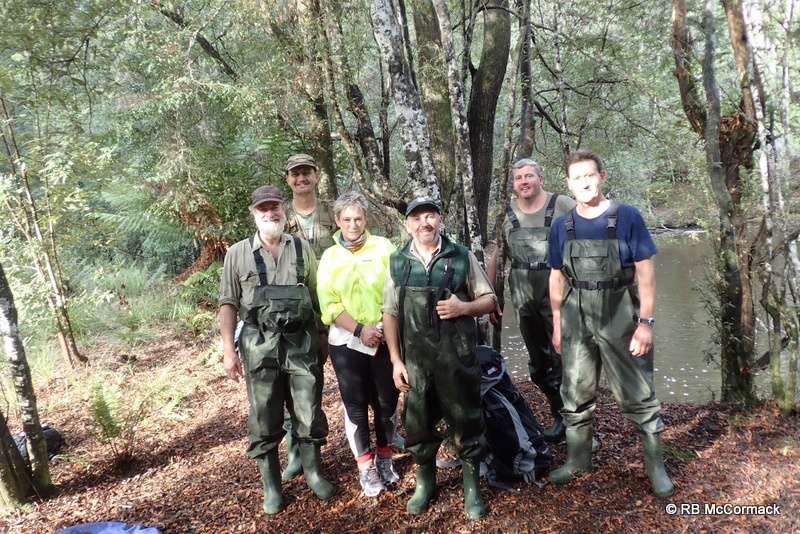 On a recent trip to Tasmania a four man Australian Crayfish Project (ACP) team joined the foremost expert on the species Mr Todd Walsh to assist him and his assistant with their research on this river giant. Todd and his assistant Michelle were great value and took us to one of their regular survey sites.

The research project involves capturing giant freshwater crayfish and microchipping them. Small microchips the same as you would use for your dog or cat is implanted into the crayfish. Microchips are what is known as an RFID device (Radio Frequency Identification Device). They are approximately the size of a grain of rice and implanted  into the crayfish. The tiny microchip is completely inert, it doesn’t have a power source and it is not activated until a scanner is run over it. The scanner reads the unique identification number of the microchip and displays it on the screen.

Each crayfish is micro tagged, sexed, weighed and measured. Its location is recorded and over many years Todd will compile very accurate and important information on the species growth and activity. 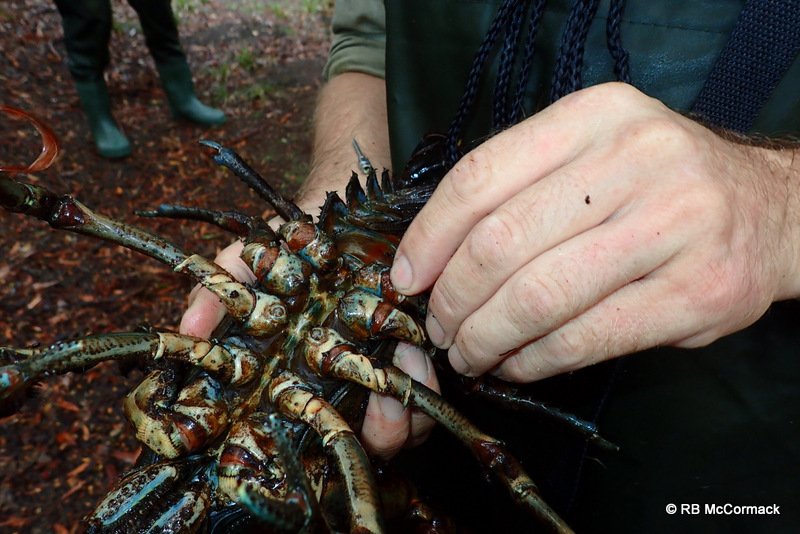 We helped Todd captured over 20 large crayfish that day and about half were new animals and half already tagged. The tagged animals are very important as Todd can look back through his records and see where it was caught last and how much it has grown over that period. 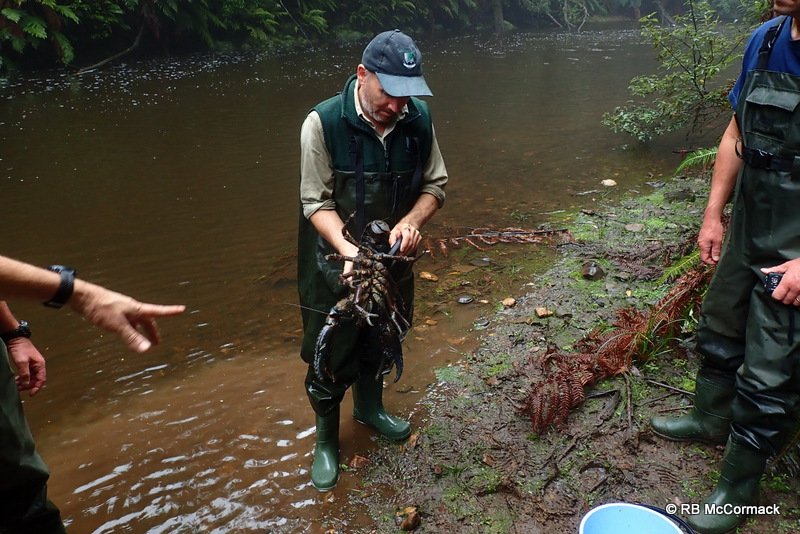 The crayfish were relatively easy to catch, being the top invertebrate predator in the river, they are fearless and happily wandered the creeks and rivers during the day. I could walk along through the river and just pick one up. They are a species that was traditionally recreationally fished for, but, back in 2000 all fishing was banned. Unfortunately, illegal fishing still seriously impacts this species which is very slow growing. 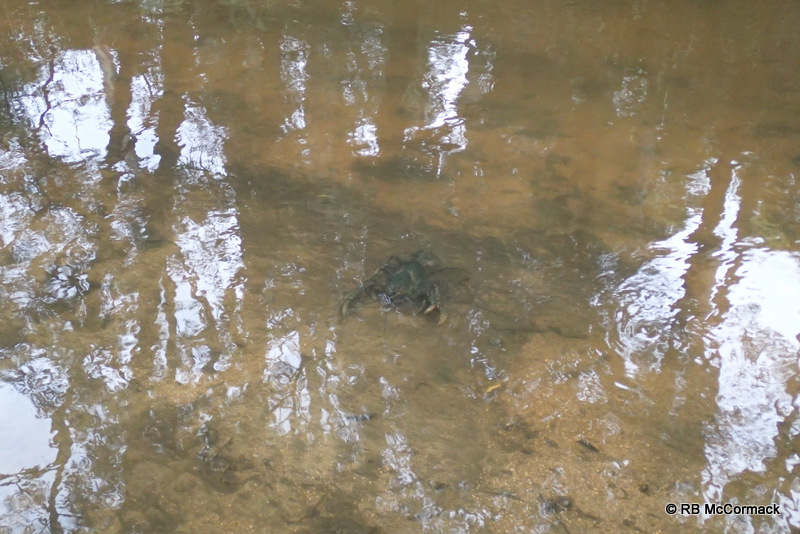 A cray in the river

They are opportunistic feeders. I was walking along the bank of the river and spotted what looked like an eel some 40 m away in the river on the other side. I called Paul over and said, that likes like an eel, and that large black shape looks like a big cray – “I think that looks like a cray eating a live eel.” Paul reckoned I was right and he called Todd over and sure enough Todd agreed and they both slide down the bank some 6 m or so into the water, raced across the river and Todd grabbed a 1.3 kg crayfish. Todd and Paul were happy they caught another crayfish, the crayfish was unhappy as it lost its eel meal, got a microchip shoved into it before release, but the eel escaped so I expect it was happy. It was an interesting observation that they can catch and eat large live eels.

They are river-dwelling crayfish preferring pristine creeks and rivers. Unfortunately, large portions of their habitat areas have been heavily modified with disastrous results for the species. 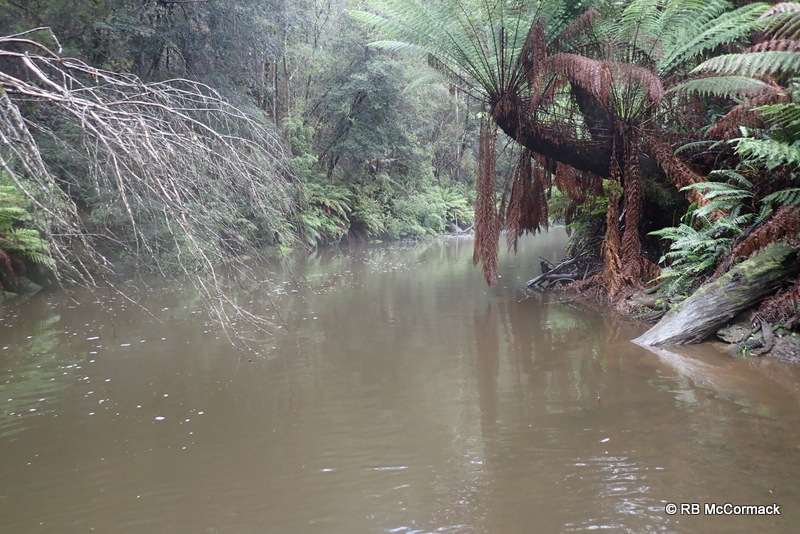 They are a species that is slow-growing, slow colonising, large-sized, easily caught, with relatively low fecundity. Being May it was within the known breeding season yet we didn’t find any berried females. Surprisingly, the females don’t berry every year and it may be 2 or more years between mating. 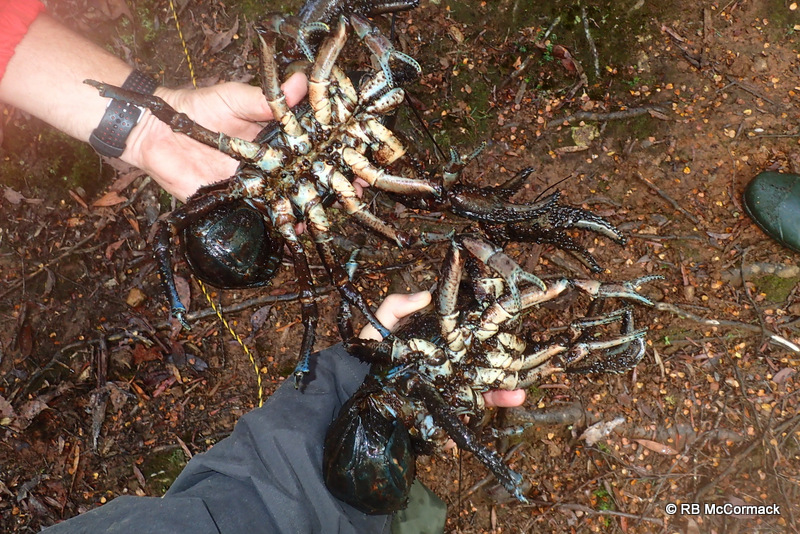 The juveniles live under rocks in the river and are very slow growing so they would be very vulnerable to predation by eels, galaxias and trout, plus cannibalism from other crayfish. We surveyed some of last years juvenile crayfish, but they were under 10-12 mm OCL so still very small. 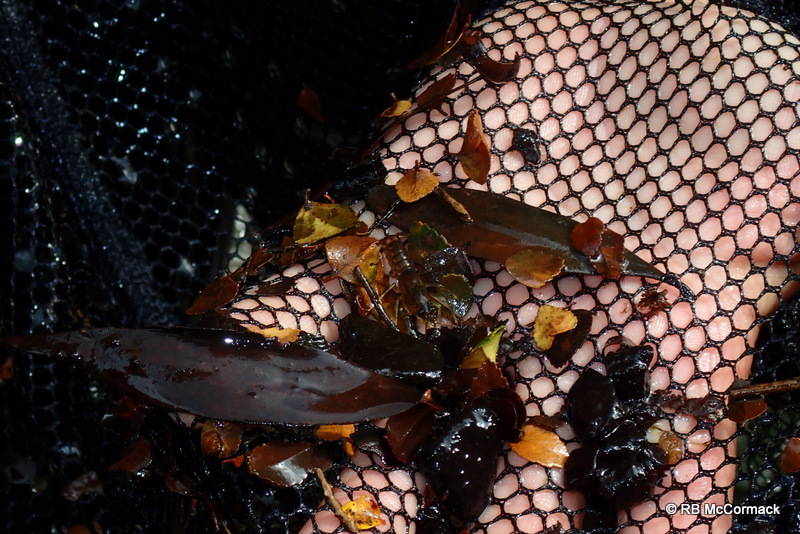 Our sincerest thanks to Todd and Michelle for taking the time to share their vast knowledge with us. A very memorable time for us all and we hope to be back soon to do it all over again.

If you would like more information on our Tassie adventure, see:  http://www.aabio.com.au/the-australian-crayfish-project-team-visits-tasmania/